The most admired part of the Cairo Walls can be seen in the point in which the Street of Galal and the Street of Mansuriya and next to some parts of both the Northern walls and the Ayyubid wall. The walls extend for along distance till the other part of El-Azhar Park and then till Bab El-Wazir. Most of these walls were usually built either as a fortress to protect the city or to link the city with the citadel at the time of El Muiz Le Din Allah. This part has been reconstructed by Badr El Din El Gamali in the 11 Century. This part of the walls is admired for the handsomely designed tower of Burg El-Zafar that was renovated later by adding a long arrow slit. The interior part of this tower is rectangular in shape and is surmounted by a brick dome and on the right side appears a flight of stairs with nice star carvings on it. There is another gate few meters southward the tower known as El Bab El Gadid or the new gate. The beauty of this gate is accentuated by its bent entrance that was imitated in the religious and architectural buildings later. 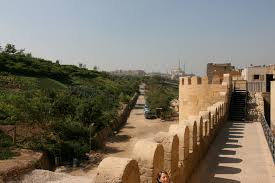 The Ayyubid walls can be considered one of the most important monuments discoverd in Cairo in the ninties. It was established by Saladin to link between the Fatimid Cairo, the Citadel and the Aqueduct. The wall was discovered during the works of Al-Azahar Park. Amarvelous collection of gates, rooms and towers and other artifacts were discoverd. Blocks of the Pharaonic era, with hieroglyphic inscriptions used in the wall were also discoverd. The wall was 15 meters under the goround level.

The Gate or Bab El-Azab that situates in El-Qalaa off Salah El-Deen Square was attached by Sultan Radwan Katkhuda to the Citadel. It was used as an entrance for the infantry or Azaban who were living

The city of Cairo owes its existence to Babylon fortress, as here is the oldest part of the City and the remains of its oldest structure. This fortress was established by Emperor Trajan, on the Nile e