Tomb of Djedamun-Ef-Ankh - Main Destinations in Egypt : The Deserts and Oasis of Egypt : Bahareya Oasis : - 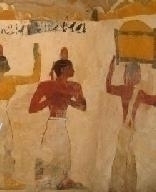 It is located in the necropolis of Qarat (Karet) Qasr Salim, to the north of Ain el-Hubaga, near the town of El Bawiti, in El Bahariya Oasis. Dating back to the Twenty-sixth Dynasty, the well-preserved and decorated tomb belongs to Djed-Amun-Ef-Ankh (Djedamun-efa-nkh), who was a wealthy landowner of Bahariya. The tomb consists of a chamber with round pillars and painted false doors. As for depictions, the large elaborate tomb is rich in colorful religious paintings of traditional offerings and the ceiling has some scenes of goddess Nekbet (the vulture) in a starry sky. The Burial Chamber is decorated with scenes depicting the deceased presenting offerings to various deities. The tombs are reached via an iron ladder down a deep shaft.