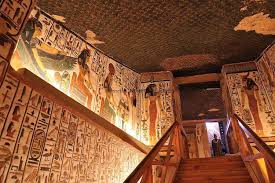 In Arabic, 'The Valley of the Queens' means 'Wadi al-Malikat' and 'Ta Set Neferu' in Ancient Egyptian means 'The Place of Beauty". It contains more than 80 tombs of queens, princes, and princesses of the Eighteenth, Nineteenth and Twentieth Dynasties. Normally, queens were buried alongside their husbands in the Valley of the Kings with the belief that they were to continue living as a family in the afterlife – just as their ancient gods existed in a "holy family". Significantly, since the Ramses I's wife, Queen Sit-Re, was buried here in his reign, this tradition was changed. Mostly, this valley contains unfinished tombs, without decoration. After the limestone walls were covered with a layer of Nile mud, they were whitewashed and then painted. Nearly ninety tombs were located in the valley, some of which were merely simple pit tombs, while others had corridors, pillared halls, stairways and large burial chambers. 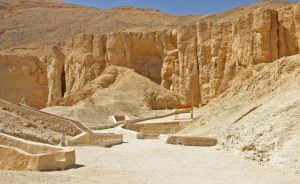 Probably due to the poor quality of the bedrock, many of the tombs that had been primarily constructed in the valley were never finished: since poor stones meant that heavy layers of plaster had to be applied before walls could be decorated, some of them fell of their own weight.
Either damaged by floods or plundered by thieves, the majority of the tombs here are anonymous. There is some evidence that the activity of burying people continued after the New Kingdom: tombs from the 4th century AD were found and a Christian monastery called Dair Rumi was built. Three tombs are currently open in this valley, all from the reign of Ramses III of the 20th Dynasty. The Tomb of Nefertasri is now closed for some security measures. Towards the end of the New Kingdom, the tombs of the Valley of the Queens were plundered (just like those of the Valley of the Kings) and their mummies moved to more secure hiding places.

More about The Valley of the Queens

The Tomb of Queen Nefertari

QV 66 The name 'Nefertari' (Meri-Mut) means 'The Most Beautiful of All', 'The Beloved of Mut'. Queen Nefertari married Ramses II before he ascended the throne and thus occupied a peculiar position in his life in general and in his court in particular: she was his friend, his confidant and the moth

Khaemwaset and his brother (or half-brother), Amenherkhepshef, (who were buried in the Valley of the Queens) were sons of Ramses III, a king whose sons had same names. Like the burials of almost all royal princes, the tomb's decoration (whose paintings are well-preserved) shows the king introducing

Tomb QV 52 is located on the West Bank at Luxor (ancient Thebes) in the Valley of the Queens. Egyptologists believe that Queen Tyti (Titi) was a wife of Ramses III and the mother of Amenherkhepshef (who was buried in QV 55). The ceiling of the Burial Chamber is ornamenting with delicate white stars

The style that Ramses III followed in erecting his Memorial Temple is quite similar to that of Ramses II. In fact, during Ramses III's life, he had repeatedly imitated Ramses II, even in choosing the names of his sons. The reliefs in the temples of both kings are deeply carved. Some believe that the

King Ramses II called his temple "The Temple of Millions of Years of User-Maat-Ra", which was one of his titles that means 'the Power of the Justice of Ra'. Work in the temple continued from the beginning of the reign of Ramses II until the 22nd year of his reign. But not long after the end of the N

King Montu-Hotep Neb-Hebet-Ra is the re-unifier of Egypt after the collapse of the Old Kingdom. He moved the state's capital to Luxor and built his funerary temple in the Western Bank. The King's temple is just on the left side of the Dair Al-Bahari Temple of Hatshepsut. The design of the temple was

Discovered recently in 1960 by a polish mission, the small Temple of Thutmes III lies behind the temples of Hatshepsut and Mentuhotep (Montu-Hotep). It is completely destroyed because it was probably buried beneath a rock that fell from the cliffs above. Going on pilgrimages to Hathor, pilgrims left

The Colossi of Memnon Statues were a small part of the gigantic complex of the Temple of Amen-Hotep III. Each of the statues was cut from a single block of stone that measures over 20 meters tall and weighed a thousand tons. Since the statues' crowns are still intact and their bases fully exposed, t

The site of the Temple of Hatshepsut is a place where colors merge in one of the most graceful views one can ever see over the Nile: the yellow of the desert, the green of the valley and the blue of the Nile all join together in one of the most impressive portrays. With its terraces, the temple itse

The Valley of the Kings is the funeral place where tombs of the Theban pharaohs found. These pharaohs reigned Egypt during the 18th to the 20th Dynasties. They are decorated with magnificent paintings illustrating the Afterlife, the great magical religious writings of the time, and the otherworld de

Khokha (Nobels Tombs) is one of the necropolises on the western bank of the Nile southward El Assasif Necropolis in Luxor. It encloses about 5 tombs tracing back to the Old Kingdom and more than 50 tomb tracing back to the 18th and the 19th Dynasty. On top of the tombs in Khokha area are Tomb of Kha

The site of Deir el Madina is situated in a small valley between the western slope of the mountain of Thebes and the small hill of Qurnet Murai. The purpose for the presence of Deir El Madina is that it lies close to the Valley of the Kings and the Queens where the war of men would be concentrated.