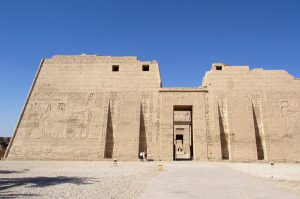 Medinet Habu Temples are of the most beautiful and well-preserved Pharaonic temples in Egypt. They are also of the most historically significant monuments, as they had witnessed the birth of new civilizations and the beginning of the weakness of the Pharaonic civilization. Here, there are well-preserved temples, patterns of military architecture from the Pharaonic Era as well as several monuments, the most important of which is the memorial temple of Ramses III (known as the Ramesseum). Thanks to the conservation of the original ceiling, the reliefs and paintings had survived to our time. The temple had a harbor where two canals met and where the ceremonial barks of the Festival of the Valley stood. Today, both the quay and the canal lay beneath a modern asphalt road and a coffee shop.

- The High Gate of Madinat Habu 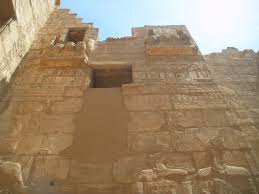 The Madinet Habu was surrounded by two high walls, between which stands the 22-meter High Gate. On each side of the entrance, two stone Assyrian-styled towers were built with the military pattern of a fortified castle, upon which the prisoners' heads are hanged. In the presence of Amen-Ra and the Egyptian gods, Ramses III is shown smiting the foes and captives from Syria, Sardinia, Palestine, western Asiatic countries, Nubia and Libya are bound. Since every corner of the temple attests and glorifies his victories, it is a clear witness of Ramses' effort– as a warrior– to protect the Egyptian borders, especially in the North. Some Egyptologists, however, think the tower had a protective function (rather than being merely memorial), believing that it was meant to protect the complex from any potential attack by the population. Before the towers, stood two granite seated statues of the goddess Sekhmet, who is the goddess of war and power, wife of ptah and one of the personifications of Hathor. Above the entrance, there are small rooms that were dedicated to the King's harem. It is thought that here, one of the wives of Ramses III, Tiy, conspired with officials of the harem to murder the King and to put her son, Pentwere, crowned in his place. After the conspiracy was discovered, Tiy and the others were arrested, judged and then killed. Ramses III died before the trial ends.

- The Forecourt of Medinet Habu 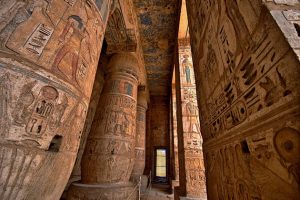 In the forecourt, in front of the building, near the garden, stood many buildings, among which are the royal stables. To the left of the court, the Chapel of the Divine Votaresses stands. The Divine Votaresses were princesses dedicated to serve god Amun. Near the High Gate, we find the Chapel of Amenirdis I of the Twenty-fifth Dynasty. It is also called the Vineyard of Anubis as in its center there is a four-columned hall with a black granite offering table decorated with loaves of bread, jugs of wine, and cooked fowl. Behind the column hall, there are shrines of Nitocris (a daughter of Psammetichus I (XXVI Dynasty), of Shepenwepet II, and of Mehitenweskhet (the mother of Nitocris). The bodies of the princesses were buried in small crypts below their chapel doors.

- The Eighteenth-Dynasty Temple in the Forecourt of Medinet Habu

The style that Ramses III followed in erecting his Memorial Temple is quite similar to that of Ramses II. In fact, during Ramses III's life, he had repeatedly imitated Ramses II, even in choosing the names of his sons. The reliefs in the temples of both kings are deeply carved. Some believe that the deepness of the hieroglyphics was meant to prevent other rulers from usurping the monument (as others had done before). The First Pylon measures 27 meters high and 65 meters long. Its two towers are decorated with huge figures of Ramses III smiting prisoners before Re-Horakhty on the right and Amun-Ra on the left. On the north tower, a long text commemorates Ramses III's victory over the Libyans in the 12th year of his reign. On both sides of the pylon, Ramses III erected a carved stela that urged his subjects to remain loyal to him, an indication to the internal troubles that the pharaoh had been facing.

The First Court of the Temple of Ramses III was the entrance of the temple and the palace of Ramses III, which lies beyond the left (south) wall. This may explain the reason why the axis of the temple does not follow an exact straight line and why there are 7 Osirid pillars on the right side and eight columns with open papyrus capitals on the left. There is a colonnaded open area of 48 x 35 meters. On the back of the first pylon, on the south tower, Ramses III is depicted fighting with his Sardinian soldiers against the Libyans and on the north tower, scribes are counting the prisoners' cut-off hands. On the rear wall of the first court, Ramses III is pictured offering Sea People prisoners of war to both Amen-Ra and Mut. Behind the pillared colonnade, appear scenes of the attack on the fortified Amorite building in Syria. Scenes of celebration are also represented on the west walls of the first courtyard, and a window was cut into the wall so that the King could watch from the palace the celebrations in the court.

Observably, the well-preserved painted reliefs in the Second Court of the Temple of Ramses III in Medinet Habu are marvelously decorated with colors that had once covered every inch of the walls of the Pharaonic buildings. On this court, appear the scenes that commemorate the celebration of various feasts, especially those of Min and Ptah-Soker, with depictions of dancing, singing, clapping, and eating. Both the east and west sides of the Second Court have Osiride pillars. On the rear (west) side, a row of columns stands behind these pillars. Standing on a wide ledge, both the pillars and columns have scenes showing Ramses III giving some offerings to various gods. Part of this court was damaged in early Christian times and it was converted to a church.

- Hypostyle Halls of the Temple of Ramses III in Medinet Habu

The terrace at the west side (rear) of the Second Court of the Temple of Ramses III is decorated with scenes of Ramses III presenting offerings to various deities and other scenes depicting his coronation. Also depicted is the procession of Ramses III's sons and daughters. Part of the Hypostyle Hall is damaged as it was used as a quarry. At the rear of the temple, there are partly intact side chambers that were the residence of the statues of the gods that participated in the festivals. The Second and the Third Hypostyle Halls are damaged. Only the chambers on their sided have reliefs. Here, there were small shrines and rooms dedicated to many gods of the Egyptian pantheon, worshipped by Ramses III.

On the exterior rear wall of the south tower of the First Pylon, one eyes a scene of Ramses III racing on his chariot into Nile marshlands; hunting wild bulls; and hunting a wild antelope. In the south of the temple, one finds the mud-brick palace of Ramses III. On this palace, other palaces were built in later times; nevertheless, evidence of the first palace can still be seen on the southern outer wall of the temple. On the southern outer wall of the temple, one has the chance to eye one of the longest inscriptions known from Ancient Egypt, namely, Madinet Habu Calendar. This inscription is a text which lists numerous ceremonies that were being performed here yearly, giving the festivals' names, dates, and duration as well as the details of the kinds of offerings that were to be made. Between the palace and the western mud-brick wall, lie the remains of the offices and the priests' residences of the temple. During the 21st Dynasty, the workers of Deir El Madina moved to live in Madinet Habu, seeking protection from the bands that attacked them in their village. The temple's walls also include depictions of different battles: battles against the Kushites are curved in the west wall; battles against the Libyans in the west and the north walls; and battles against the Sea People in the east wall. The naval battle against the Sea People, in the costs of Western Asia, is the first naval battle ever depicted.