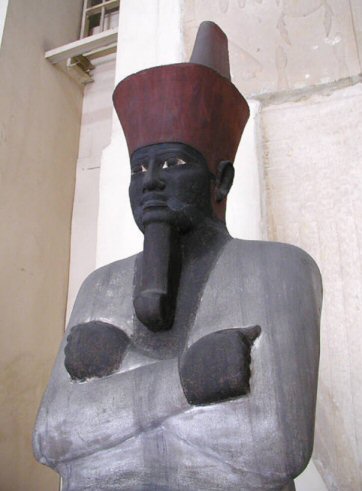 Mentuhotep II succeeded Inyotef III in about 2061 BC. When he came to the Theban throne under the name S'ankhibtawy, a name that means "He who Breathes Life into the Heart of the Two Lands", his domain stretched from the First Cataract to the tenth nome of Upper Egypt. In other words, it was still reduced to the North by the territory of the princes of Asyut. A hostile peace was maintained between the two kingdoms, but this was disrupted when the Thinite Nome, suffering from famine, revolts against the Hierakleopolitans. Mentuhotep captured Asyut and passed through the 15 nome without resistance – this was effectively the fall of the Hierakleopolitan Dynasty (in the Ninth year of his reign). Mentuhotep was proclaimed the king of Egypt with the new title of 'Nebhepetre, the son of Re'. He declared his southern origins by taking the Horus name Netjerihedjet that means "Divine is the White Crown". However he had not spread his authority over the whole country and the process of pacification was to last for several more years. At this time, Dakhla Oasis, in the Western Desert, acted as a temporary place of refuge for the political opponents of the Theban Regime until they were hunted down by the followers of Mentuhotep. He rewarded the royal princes of the Oryx and the Hare Nomes by allowing them to continue to rule their provinces and he also reinstalled the other rulers in Upper Egypt, except those at Asyut. He controlled the rest of the country through Theban administrators, particularly watching over the provinces of Herakleoplis and Heliopolis. Mentuhotep moved the capital to Thebes created the new office of 'Governor of the North' and reestablished the old chancelleries and the post of vizier. Three of the viziers who held office during his reign are known: Dagi, Bebi, and Ipy. These political changes were probably accomplished 30 years after Mentuhotep ascended to the throne by, having thus achieved the reunification of the country. After 39 years as a King, he took a new Horus name, Sematawy which means 'He who unifies the Two Lands'. Reaching 39th year of his reign (i.e. 30 years after the fall of the Hierakleopolis), he celebrated his Sed-Festival, and added some statues for himself in an Osiriform in his funerary temple. In the same year, he went on a Nile-cruise, accompanied with members of his family and countries, down south until he reached Gebel El-Silsilah which was regarded as the southern frontier of Egypt. The explanation that can be given to account for this trip is that he wanted to wait for the arrival of his son Inyotef who was probably leading a campaign to Nubia. It is possible that Mentuhotep appointed his son as his co-regent, but he died early and was buried in the court of the funerary temple of his father. Anyway, his funerary temple is now destroyed. Mentuhotep II died around 2010 BC, after a reign of 51 years. Later, his son, Mentuhotep III, rose to the throne. 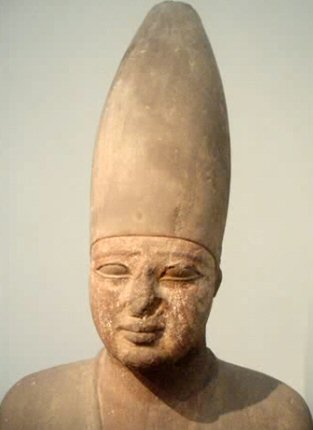 Mentuhotep III S'ankhtawyef which means "He who breathes New Life into the Two Lands" was left with the throne of a prosperous and very organized country. His reign lasted for about 12 years. During his reign, he continued to pursue the construction programs begun by his father at Abydus, el-Kab, Armant, El-Tod, Elephantine, and Western Thebes, where he built a chapel to Thoth. His own tomb, near Deir el-Bahari, was never completed. Mentuhotep III consolidated Egyptian control over the Eastern Delta, building fortresses along its borders in order to protect the area from the Asiatics. This defense system was to be maintained for the whole of the Middle Kingdom, although later Egyptians tended to credit Khety III with being the founder of the Delta defenses, and a religious cult was dedicated to both Khety III and Mentuhotep III at El-Khatana in the Eastern Delta. Mentuhotep III was also able to revive the practice of sending expeditions to Punt. In the 8th year of his reign, a 3000-men expedition under the command of Henenu was sent from Koptos to Wadi Gasus, digging 12 new wells along the route in order to provide water for future expeditions between the Nile Valley and the Red Sea. The expedition brought numerous products from Punt, including quantities of 'Arab gum'. On their return, the same expedition also quarried stone in Wadi Hammamat. A particularly interesting documentation had survived from the end of Mentuhotep III. We are referring about the correspondence of a man named Hekanakht, who was the funerary priest of the vizier Ipy at Thebes. Being far from his estates, he sent a whole series of letters to his family, who were looking after his lands while he was absent. These documents were discovered at Deir El-Bahari in the tomb Meseh, who was also somewhat connected with Ipy. The letters include all kinds of information concerning the distribution of the properties of Ipy, farming, taxes, and an inventory of goods dating to the 8th year of Mentuhotep III - all precious sources of information for the economic and legal systems of the period. Hekanakht also described the problems of his time, including the beginning of famine in the Theban Region. After 12 years of reign had passed, his son Senusert succeeded him, only for a very short span of time, and then this was followed by a period of disruption that continued for 5 years. 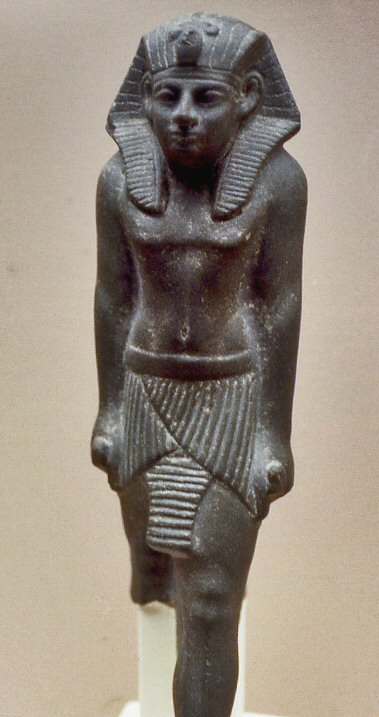 After the death of Mentuhotep III, the country was left in a confused state. At this point, the Turin Canon mentions 'seven empty years' which corresponds to the reign of Mentuhotep IV, whose coronation name Nebtawyre which means 'Re is the Lord of the Two Lands', perhaps represents a return to the values of the Old Kingdom. A graffito in Wadi Hammamat, in which he is simply named as Nebtawy, announces the sending of an Expedition that consisted of 1000 men in the second year of his reign. Its purposes were to bring back stone sarcophagi, find new wells in the Eastern Desert and locate a more favorable port on the Red Sea. This port, Mersa Gawasis, was to be established during the reign of Amenemhat II as the embarkation point for expeditions to Punt. Mentuhotep IV's expedition to the Red Sea was led by his vizier, Amenemhat, who is generally identified with Amenemhat I, his successor. Only one inscription links the two kings in such a way as to suggest that there was a co-regency.

Mentuhotep IV was the last representative of the family of the Theban princes, and Amenemhat I was the first ruler of a new dynasty. This is confirmed by his choice of his Horus name 'Whm-mswt that me